DARIO FRANCHITTI-2ND, HELIO CASTRONEVES-1ST AND WILL POWER-3RD
Castroneves won in Japan for the 2nd year in a row. Dario Franchitti beat Will Power to the finish line by 0.4997 of a second to claim second place and close the championship points gap to 12 heading into the season finale Oct. 2 at Homestead-Miami Speedway. It will be Franchitti against Will Power. And the forever number 2, Ryan Briscoe, he came in fourth. One more to go.
photo credit: © 2010 indycar.com
﻿
Posted by CLASSICS, ETC. at 11:03 PM 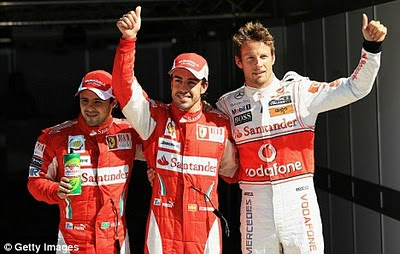 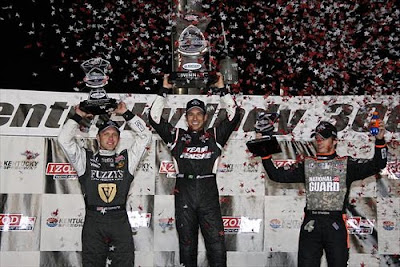 ED CARPENTER-2ND, HELIO CASTRONEVES-1ST AND DAN WELDON-3RD
Helio Castroneves took a big chance of not pitting for fuel, like so many others did near the end, and took home the first place. Ed Carpenter, who had to pole-position, came in second. Dan Weldon pulled in third. 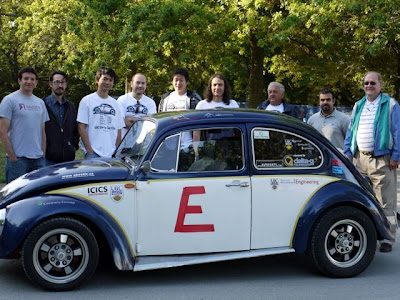 1972 ELECTRIC VW.....4,000 MILES ACROSS CANADA
It’s a 1972 VW Beetle, which a group of students from the University of British Columbia Electric Car Club retrofitted with an electric motor. They had originally intended to enter it in the Zero Race, in which teams in electric cars are racing each other around the world. Once they realized they couldn’t make the deadline,
The UBC Electric Car Club is made up of students from a variety of disciplines. What they all share, according to their website, is a desire “to break the fossil fuel dependency for transportation and commuting purposes.” They’re also interested in establishing UBC as a center of excellence for green technology, and in motivating other students worldwide to get involved in the field.
Although the club was formed just a year ago, they’ve already put together an impressive little car. The E-Beetle’s original combustion engine has been replaced with an electric three-phase AC induction motor, powered by a lithium-iron phosphate battery pack. Some extra power is generated through a four-wheel regenerative braking system. The car has a range of 550 km. (341 miles) at 50 km/h (31 mph), or 300 km. (186 miles) at 100 km/h (62 mph), and takes about four hours to recharge. It has a top speed of 140 km/h (87 mph).
The two drivers and their dog set off from Vancouver, British Columbia on August 21st, and hope to arrive at their destination of Halifax, Nova Scotia by September 3rd – by doing so, they hope to break the speed record for driving across Canada in an electric vehicle. They are making the trip without the assistance of any support vehicles.
Unlike many EVs, the E-Beetle doesn’t require special charging stations. The team have been recharging at standard 50 amp outlets in places like campgrounds along the way.
photo credit: © 2010 gizmag.com
edited text: Ben Coxworth
Posted by CLASSICS, ETC. at 6:17 PM