INDYCAR IN MICHIGAN....DETROIT, THAT IS 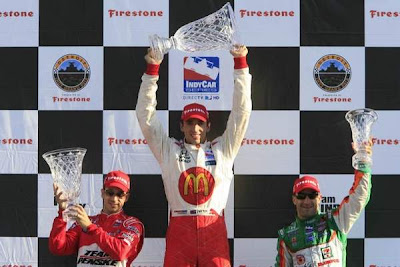 My hometown always looks good on television or from a distance. Roger Penske made a lot of changes to the track that had not been used for a few years. Until last year, that is. Helio Castroneves, who had been leading for about 70 laps, got stuffed by the race stewarts. He was ordered to pull over and let the man in second pass. They said that he was blocking. I came right out of my chair because it looked like normal racing to me. They say that they usually give a warning, but none was issued. The difference it made was that Castroneves will go into next week's championship round 30 points short instead of a reasonable 20. What will they pull in Chicago?